A Hero Asks for Help 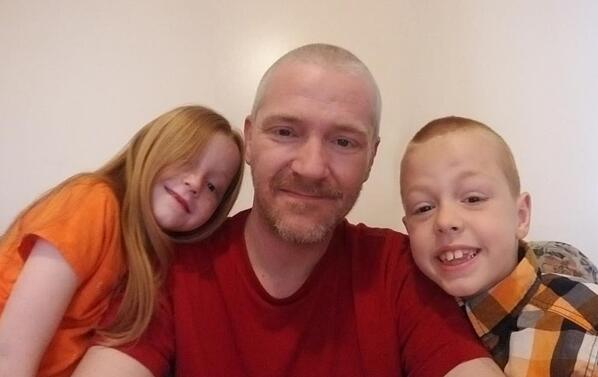 Casey Wright, a slender man in his late thirties, would likely give you a slight chuckle with a side smile of embarrassment if you were to call him a hero to his face. To say it was a laugh would be too overdone for Casey. He’s quiet. Unassuming. Not your typical description of a hero. But to his two kids Kinnick (8) and Kyndall (7), he’s just that. Especially with what they’ve gone through as a family.

A HERO ASKS FOR HOUSING:
After the kids’ mom went to jail in the summer of 2019, things quickly got tough for Casey and his kids in Keokuk. “I didn’t have daycare set up for them. I didn’t really have anything in place,” he said. “Pretty soon we were looking for housing.”
With a population of around 11,000 people, Keokuk, Iowa, didn’t offer many resources for a single dad. “There’s really not much of anything there,” Casey said. “And for somebody who’s homeless, there is absolutely nothing there. If you don’t have a friend, you’re going to be outside. We actually got to the point where we were sleeping in a barn – me and my little kids. In a barn.”
Eventually, he was guided to Hawthorn Hill New Directions Shelter.
New Directions Shelter is a Des Moines-based emergency shelter for families with minor children. And Casey’s “lucky” to have found them when he did: “Prior to 2017, we wouldn’t have been able to accept someone like Casey. We just took single women with children,” said Kelsie Pinegar, Casey’s case manager at Hawthorn Hill. “After HUD guidelines changed, we are now able to provide shelter for anyone who identifies as a family unit with minor children.

A HERO ASKS FOR APPROPRIATE AND AFFORDABLE CHILDCARE:
When the Wrights entered Hawthorn Hill's New Direction Shelter, Casey had to start from scratch. One of the biggest barriers he faced was finding affordable childcare. Childcare Assistance applications can take up to 30 days to process, and options can be limited for children the ages of Kinnick and Kyndall.
Arriving in late July, when school is out of session, and with application processing delay, Casey didn’t have any options outside of the shelter. Though he was ready and able to work, without childcare, he couldn’t start a job until the kids went back to school in August.
Finally, when school started and the kids were approved for childcare, Casey could start the job search. Thankfully, despite not having his high school diploma and a criminal record, he was able to find a full-time job quickly.
Casey wasn’t focused on what his wage was at first, he just wanted something to get experience and an income so he could start moving forward. He enrolled in the DMACC HiSet program to earn his high school equivalency – which he finished in less than four months. He’s since enrolled in DMACC college prep and business classes and is eager to finish with an associate degree.
“It’s hard to stay motivated sometimes,” Casey said. “Once I start bettering myself, and trying to get a higher paying job, I’ll have to pay for all of the daycare costs on top of other stuff.” According to the Iowa Department of Human Services, 94.7% of parents receiving Child Care Assistance benefits are working, but a raise of as little as 15 cents an hour could put them in jeopardy. He sometimes wonders, “what’s the point?” But in times like those, he remembers: “I can’t go backwards. Moving forward with my kids is always the key.” To move forward, he needs to gain primary custody – and he can’t do that alone.

A HERO ASKS FOR AN OPEN MIND AND AN OPEN HEART:
“I don’t know how anybody survives a as a single parent without help,” Casey said. “And for people like me, who are out there trying their best – sometimes there's just barriers; no matter what you do, you're not going to get over it by yourself.” He believes that without Kelsie and the help she’s provided through Hawthorn Hill, a United Way of Central Iowa funded partner, he’d be in a far different, far worse position than he’s in right now.
“I want to share my experience so somebody who might need the help feels like they can speak up – don't be afraid to ask about anything because no question is a dumb question,” he said. “If you don't ask, you’ll never get the help. Seeking support is so, so important at any level, at any point in life.”