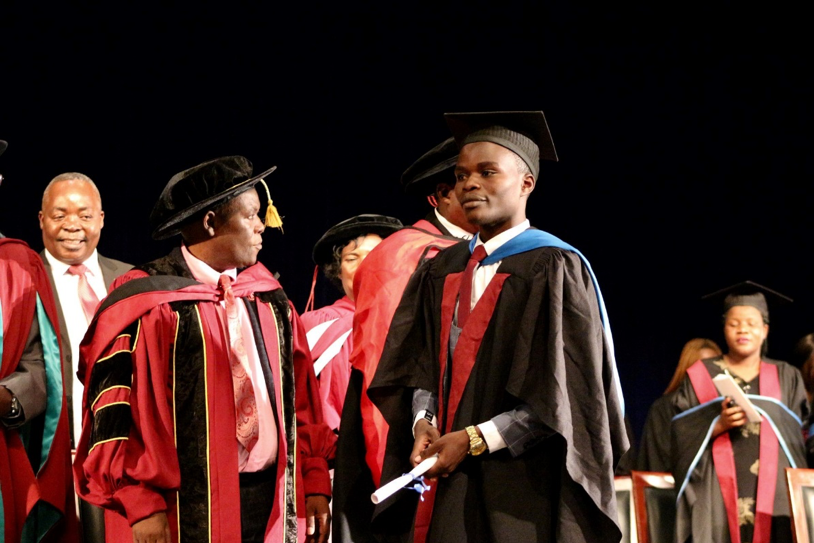 "The finger of the Lord pointed at me to be the first graduate in our family and no one bent it."

Lefani Brino was the first person in his family to attend secondary school, let alone university. As he walked across the stage to receive his diploma at his university graduation, his heart swelled with pride.

Like many children in the impoverish country of Malawi, he once had no hope that his education would go beyond primary school. Now here he was, graduating with a degree in Business Management with distinction.

He thanked the Lord for giving him this opportunity.

Lefani’s parents are peasant farmers. Their farm only produces enough food to feed their family. It was not enough to provide other basic needs for Lefani and his six siblings. Life was hard. Secondary education is not free in Malawi, so continuing beyond primary school was out of the question.

But “God offered me an opportunity in 2009,” said Lefani. That was the year that he became a part of the Children of the Nations (COTN) program. Without the generous donors who cared about his education, Lefani would never have been able to move on to secondary school and later to university.

Lefani said, “I know this wouldn’t have been possible if Children of the Nations did not play the biggest role of providing for me the entire time.”

“…[what] I like most about COTN is a spirit of caring, which symbolizes the presence of love.”

Although he grew up as a Christian in the Church of Central African Presbyterian and was a member of the choir, Lefani said that, “Children of the Nations helped me grow in my spiritual life.” He is now an usher at church.

Lefani says that in his community he is now viewed as someone who is educated and can make change. It is his biggest desire to help other kids in his community whenever he is able to, starting with his family. He wishes his siblings had gotten the same opportunity that he had.

Today, Lefani is working for a well-known financial institution in Malawi and is able to make a living wage and support his family in a country where 50% of the population survives on less than $1.25 a day. He hopes to start his own business someday, a business that will help his community and Malawi as a whole. “My dream is to help in curbing the problem of unemployment which seems to be a cancer for Malawian economy.”

“God through COTN has given me more than what I asked for. I do not take this for granted, I will therefore pay it forward. Because to whom much is given, much is expected.”

You can help other children like Lefani. For $36 a month you can sponsor a child through COTN.