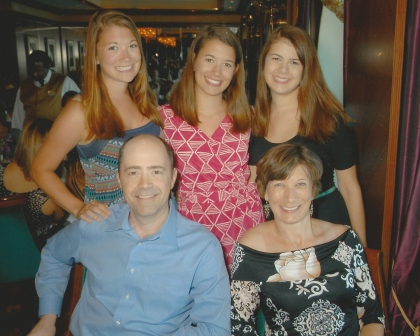 Steve Russell’s voice breaks with emotion as he talks about a remarkable moment in his daughter’s life. “The first time she ran that cross country meet three months after being in the hospital was an amazing thing,” he says. At least half of the competitors had already finished the race, but Steve and his wife Debbie were waiting for their daughter, Courtney. “Then she crossed the finish line, and Debbie and I are sitting on the finish line just crying, tears running down our faces.” Just three months before that touching moment, at the age of 16, Courtney Russell spent four days in the hospital where she was diagnosed with systemic juvenile idiopathic arthritis, or sJIA.

It all started a year earlier. As Courtney’s sophomore year in high school was getting into full swing, she started getting sick. She had a fever, a rash, joint pain and a sore throat. At first, the doctors thought it was a parvovirus infection. Courtney was taking medication for pain, anti-inflammatory drugs and allergy medication, but nothing was helping.

“It got so bad that she couldn’t roll over at night without being in extreme pain, getting from the bed to go the bathroom was extraordinary,” Steve says. To make matters worse, the Russells just weren’t getting the answers they wanted. “It was gut-wrenching to just not know what was wrong with her and that we couldn’t do anything to help her,” Debbie explains.

Unfortunately, Courtney got worse very quickly, so Steve and Debbie took her to the Ann & Robert H. Lurie Children’s Hospital of Chicago. That’s where they met rheumatologist Marisa Klein-Gitelman, MD, who took the lead on Courtney’s case. In just a few days, she had Courtney’s diagnosis, sJIA with possible complications from macrophage activation syndrome, or MAS. MAS is a potentially life-threatening complication common with rheumatic diseases that causes a massive systemic inflammatory response.

Within weeks of starting treatment, Courtney was back on her feet. A few months later, she was running in that cross country meet, being greeted at the finish line by her crying parents. But the journey didn’t end there for the Russells.

Dr. Klein-Gitelman told Steve and Debbie about the work being done by the Rheumatology Research Foundation. They wanted to get involved, so they helped organize a special event in April called “Coffee & Conversation,” which brought together patients and fellow parents of children with rheumatic diseases. They heard about advances in research and treatment of inflammatory arthritis. They also learned how few rheumatologists are currently practicing, especially pediatric rheumatologists. According to the American Board of Pediatrics (ABP), the organization that certifies pediatric rheumatologists, at the end of 2012, there were more than 280,000 children for every board-certified pediatric rheumatologist in the United States. Adding to the problem, the ABP reports that 10 states don’t have a single pediatric rheumatologist.

The Russells took their support one step further, pledging to donate $25,000 to the Foundation. “We are fortunate that we can help in some way,” Debbie explains, “so we feel we want to and need to.” Steve and Debbie both hope that through the Foundation, they can reach more medical students and encourage them to study rheumatology. They also believe in the research being supported by the Foundation. With his daughter in mind, Steve explains what motivated them, “just doing anything we can to find a cure so nobody has to go through this…. Courtney is probably going to deal with this for life. We’d love to think that the cure is around the corner, and we can help.”